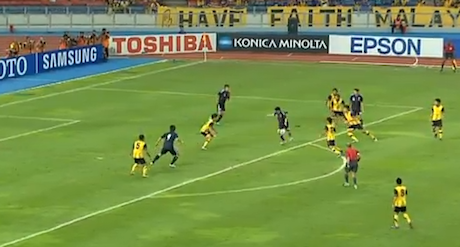 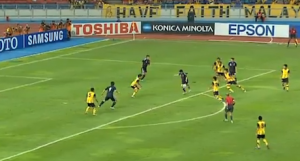 In Group C, Japan virtually made sure of their place in a fifth successive Olympics thanks to a confident 4-0 thrashing of Malaysia.

Before the match, Japan were tied with Syria on nine points and on goal difference, but Syria lost ground with a 2-1 defeat to Bahrain.

Japan now have 12 points, three ahead of Bahrain – who they face in their last game – and Syria.

“If we had scored one or two more goals, it would have been better, but I guess four goals is fine,” Japan coach Takashi Sekizuka said.

“I’m satisfied with the performance of the team, and they got the right result at the end. Individually they played well.”

Japan showed their dominance in the early minutes of the match after Hiroki Sakai blasted the ball towards the Malaysian goal only to be saved by goalkeeper Khairul Fahmi Che Mat.

Sakai, however, was spot on in the 35th minute to give his side the lead. Yuya Osako made it 2-0 for Japan before half time.

Genki Haraguchi made it 3-0 in the 55th minute while Manabu Saito stamped his mark by scoring the final goal of the match in the 60th minute.

Malaysia are out of the running for qualification, having lost all five of their games.