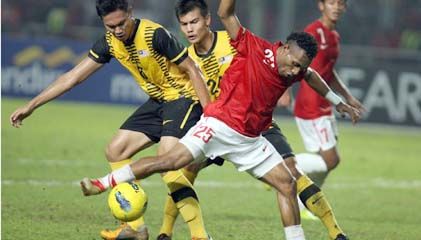 Malaysia defeated Indonesia by a single goal in the SEA Games’ Group A soccer match on Thursday night.
The only goal of the game was scored by Malaysian winger Ibrahim Syahrul Azwari in the 18th minute. Indonesia failed to reply, despite coming close on several occasions with some great goal-scoring opportunities.

Okta Maniani, one of Indonesia’s leading players and a second half substitute, failed to make the required impact.

Both teams booked their places in the semifinals of the competition, with Malaysia topping the group on 10 points.