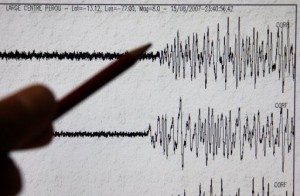 An earthquake with an initial magnitude of 8.9 has struck under the sea off Indonesia’s northern Aceh province.

The quake triggered a tsunami warning across the Indian Ocean region.

The Pacific Tsunami Warning Center said it was not yet known whether a tsunami had been generated, but advised authorities to “take appropriate action”.

The region is regularly hit by earthquakes. The Indian Ocean tsunami of 2004 killed 170,000 people in Aceh.

The US Geological Survey, which documents quakes worldwide, said the Aceh quake was centred 33km (20 miles) under the sea about 495km from Banda Aceh, the provincial capital.

The tsunami centre’s warning said quakes of such a magnitude “have the potential to generate a widespread destructive tsunami that can affect coastlines across the entire Indian Ocean basin”.

Reuters reports that people in the region were making their way to higher ground.

The extent of the damage is still being assessed.

In 2004, a 9.1-magnitude underwater earthquake struck off the coast of Sumatra, triggering a tsunami that killed more than 200,000 people in 14 countries. Aceh was one of the worse affected areas.
The tsunami, which washed away entire communities, caused nearly $10 billion in damage and more casualties than any other tsunami in history, according to the United Nations.

Indonesia is on the so-called Ring of Fire, an arc of fault lines circling the Pacific Basin that is prone to frequent earthquakes and volcanic eruptions.

A TSUNAMI WATCH IS IN EFFECT FOR

THIS BULLETIN IS ISSUED AS ADVICE TO GOVERNMENT AGENCIES. ONLY
NATIONAL AND LOCAL GOVERNMENT AGENCIES HAVE THE AUTHORITY TO MAKE
DECISIONS REGARDING THE OFFICIAL STATE OF ALERT IN THEIR AREA AND
ANY ACTIONS TO BE TAKEN IN RESPONSE.