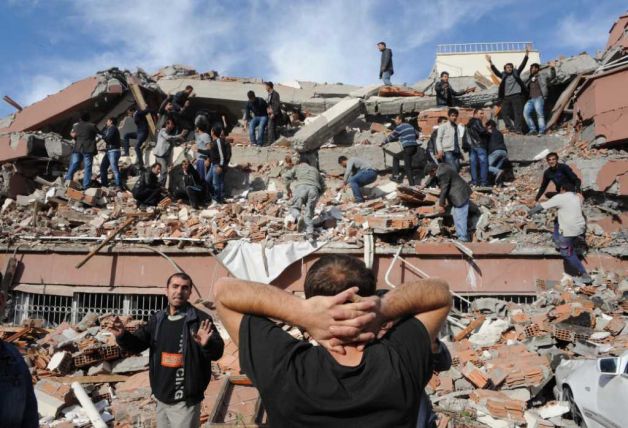 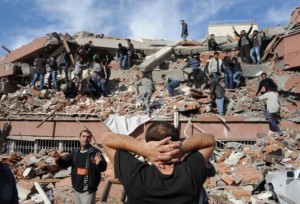 A powerful 7.2-magnitude earthquake struck eastern Turkey on Sunday, killing at least 85 people and sparking widespread panic as it collapsed dozens of buildings into piles of twisted steel and chunks of concrete.
Tens of thousands of residents fled into the streets running, screaming and trying to reach relatives on cell phones. As the full extent of the damage became clear, desperate survivors dug into the rubble with their bare hands, trying to rescue the trapped and the injured.
“My wife and child are inside! My 4-month-old baby is inside!” CNN-Turk television showed one young man sobbing outside a collapsed building in Van, the provincial capital.
The quake hit Turkey’s mountainous eastern region at 1:41 p.m. with an epicenter in the village of Tabanli, 10 miles (17 kilometers) from Van, according to the U.S. Geological Survey.
State-run TRT television reported that 59 people were killed and 150 injured in the eastern town of Ercis, 25 others died in Van and a child died in the nearby province of Bitlis.
Turkish scientists estimated that up to 1,000 people could already be dead, due to low local housing standards and the size of the quake.