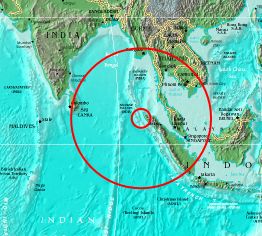 A strong earthquake with a magnitude of 7.3 struck off Northern Sumatra’s West Coast Wednesday, triggering a tsunami advisory that was lifted later.

However, the tremors of the quake, which occurred at 2.36am, were felt in Perlis, Penang and Kedah, according to the Malaysian Meteorological Department.