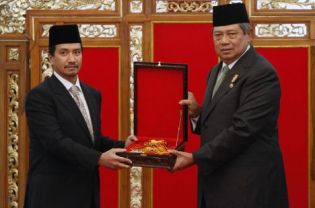 President Susilo Bambang Yudhoyono may have been flirting with political suicide when he awarded a Malaysian sultan a medal of honor on Sunday amid Indonesia’s growing resentment toward its neighbor.

Ties between the countries are strained, or more strained, after Tubagus Hasanuddin, a lawmaker from the opposition Indonesian Democratic Party of Struggle (PDI-P), alleged that Indonesia could lose 1,490 hectares of land in West Kalimantan to Malaysia. That immediately prompted a wave of condemnation and anti-Malaysian sentiment here.

The government denied a land grab by Malaysia, but that has failed to appease House of Representatives members.