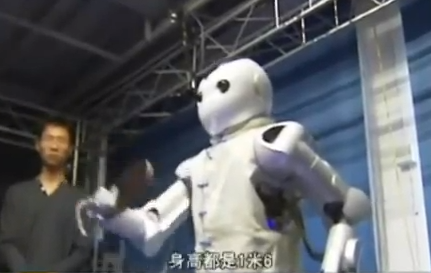 Named “Wu” and “Kong”, these two human-sized robots are the products of China’s Zhenjiang University. They play ping-pong not only against each other, but will take on humans as well. In the video, it’s clear they’re as adept at forehand shots as they are at the backhand.

Named for a character in the classical Chinese Epic novel (“Monkey King” or “Sun Wukong”), the robots are part of a long-term project at the university to build a “high-performance humanoid robot unit and system.” The university website also oddly calls the bots “Big Size Humanoid Robots.” This may be reference to the multitude of tiny robots produced in and around Japan. A tiny robot, for instance, recently took on an Ironman Triathlon challenge.