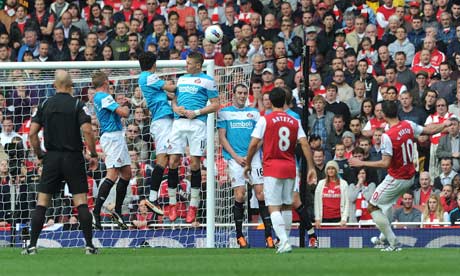 Arsenal defeated Sunderland today in a match that they dominated early, did the opposite of dominating in the middle, and then more or less dominated late again to take all three points at the Emirates. Robin van Persie cut open the Sunderland defense just 28 seconds into the match before Sebastian Larsson equalized with a brilliant free kick half an hour later.

Van Persie put the hosts back ahead for good with a late free kick effort that was basically the mirror image of Larsson’s, and Arsenal were able to see out the final 12 minutes for the win.