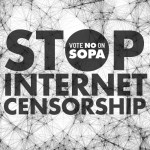 WordPress has finally come out in full force against The Stop Online Piracy Act (SOPA).


Normally we stay away from from politics here at the official WordPress project — having users from all over the globe that span the political spectrum is evidence that we are doing our job and democratizing publishing, and we don’t want to alienate any of our users no matter how much some of us may disagree with some of them personally. Today, I’m breaking our no-politics rule, because there’s something going on in U.S. politics right now that we need to make sure you know about and understand, because it affects us all.

Using WordPress to blog, to publish, to communicate things online that once upon a time would have been relegated to an unread private journal (or simply remained unspoken, uncreated, unshared) makes you a part of one of the biggest changes in modern history: the democratization of publishing and the independent web. Every time you click Publish, you are a part of that change, whether you are posting canny political insight or a cat that makes you LOL. How would you feel if the web stopped being so free and independent? I’m concerned freaked right the heck out about the bills that threaten to do this, and as a participant in one of the biggest changes in modern history, you should be, too.

The full version can be seen here >>


What is SOPA?
The Stop Online Piracy Act (SOPA), also known as H.R. 3261, is a bill that was introduced in the United States House of Representatives on October 26, 2011, by House Judiciary Committee Chair Representative Lamar Smith (R-TX) and a bipartisan group of 12 initial co-sponsors. The bill expands the ability of U.S. law enforcement and copyright holders to fight online trafficking in copyrighted intellectual property and counterfeit goods.