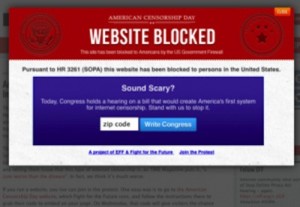 Two newly proposed pieces of legislation in the Senate and House of Representatives attempt to curtail piracy of intellectual property on the internet, but many argue that they go too far. If passed, these bills would have significant impact on anyone who shares media on the internet–including sites that post music and videos.
The House’s Stop Online Piracy Act (SOPA) and the Senate’s Protect IP Act, would allow the government to blacklist and block websites for posting allegedly illegal materials, without first taking court action, according to a New York Times Op-Ed. According to the Times, this would mean that if your site (whether you’re a tiny startup or YouTube) is found to be hosting a video or song that you don’t own, it could be “blocked by Internet service providers, search engines, payment providers and advertising networks, all without a court hearing or a trial.”

While this legislation aims to better protect the copyrights of artists and labels, it could be slippery territory for anyone who posts or shares music on the web, since the line between legal and illegal sharing is often unclear: How many times have artists posted tracks and asked fans to share it online, only for their labels to serve those same fans with takedown notices?

Is TMNet currently censoring the Online Media in Malaysia?