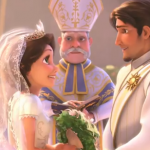 Tangled Ever After is a 5-6-minute short animated film, it premiered before the 3D theatrical re-release of Beauty and the Beast on January 13, 2012, and will air in Spring 2012 on Disney Channel. It was directed by Nathan Greno and Byron Howard, the directors of Tangled. The short picks up right after Tangled left off, showing Rapunzel marrying Flynn Rider, and the comical chaos caused by Pascal and Maximus, who try to find the lost rings before the wedding starts.