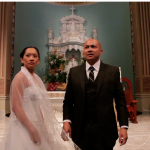 Looks like couples are now willing to spend some moolah on video production for their wedding videos, well maybe only a handful but it’s a good start, making a great video for your wedding is not too far fetch as it’s the most important day of your life.

Take for instance the recently married Don and Kaycee Laroza who created a wonderful video for their wedding reception.

The set up: After the bridal party is introduced at the reception it’s time for the bride and groom to make their appearance. But when the MC calls out the new Mr. & Mrs. Laroza, they are no where to be found. So to buy some time, the Same Day Edit video of the earlier events would be played for the wedding guests.

The reward: A surprise twist and a grand entrance that no one was expecting.

Rated M for Mature audiences for some language, adult humor and violence.