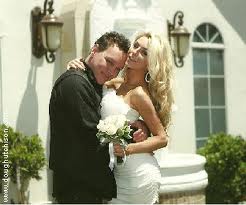 The actor of the show “Lost” Doug Hutchison was announced that he is officially married his 16 year old girlfriend, Courtney Alexis Stodden.

According to a notice on his website that has been enjoying wedded bliss with his new wife the aspiring country singer for a few weeks.

They officially married on Friday May 20th, 2011 at 12pm in The Little Chapel of flower in Las Vegas, Nevada,” that he said on his site says “ Mr. and Mrs.Hutchison live together happily ensconced in their Hollywood Hills home with their lil’s pups, Everette and Tuna!”

Yeah yeah! I know it a woman dream to get wedding there, right? Hahaha…

On “Lost” he was the one who played Horace Goodspeed, the leader of the Dharma Initiative group on the island.

Beside that they also release a statement to E! in light of what is sure to be a few raised eyebrows over their 35- year age difference.

They said that they very aware that their vast age difference is extremely controversial but they were very much in love and want to get the message out there that true love can be ageless.

Awwwwwww! So sweet! To Doug Hutchison I salute you! Haha -CNN