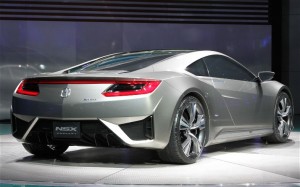 Ever since the old model ended its 15 year life in 2005, Acura’s been threatening then denying a replacement. It’s been the longest automotive tease in history but now finally it’s here — this “concept” really is the new NSX.

The car had earlier been spotted on the set of The Avengers movie coming out in May 2012, the car belongs to “Tony Stark” (Iron Man) in the movie.

Jerry Seinfeld is so excited about the new Acura NSX that he will stop at nothing to acquire the very first one. Check out the extended version of Acura’s big game commercial.