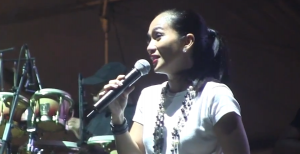 Urbanscapes may have been for the younger crowd but there were still tons of Sheila Majid fans at the event, Sheila looked energetic and entertained her fans to all her major hits.

Doing a public performance at @urbanscapes on 25thNov Padang Astaka PJ-730pm.Heard its a young crowd. Now what songs should I sing? ?

Join #URBANPURSUITS to get FREE tickets to Urbanscapes 2012