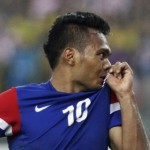 Skipper Safiq Rahim opened the scoring with a brilliant free kick in the 15th minute but it was cancelled out by the goal by Keoviengpheth Lithideth on the 38th minute.

Malaysia pressed on in the second half and 2010 tournament top scorer Safee Sali capitalised on a perfect cross by Wan Zack Haikal Wan Nor to head in the second goal in the 66th minute.

In the 75th minute, Wan Zack got himself on the score sheet after heading in a fine cross from S. Kunalan.
Four minutes later, substitute Khyril Muhymeen Zambri added the fourth goal just minutes after he came in to replace Safee.