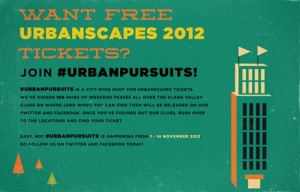 Still haven’t got your tickets to Urbanscapes 2012 yet? Here’s your chance to win free tix to the event.

100 pairs of Weekend Passes have been hidden in locations around the Klang Valley (KL and PJ). Urbanscapes will give out clues via their twitter account with the hashtag #UrbanPursuits on the location of these tickets.

Here’s how #UrbanPursuits will work:


* From 1 – 14 November, Urbanscapes will be tweeting clues related to where they have hidden the tickets. On some days,only 1 location will be revealed. On another, they might reveal 3 locations. Just keep track by monitoring the Twitter hashtag #UrbanPursuits.

* Once you have figured out the answer to our clues, just head on over to the location! Your ticket can be found there. 1 ticket = 2 Weekend Passes.

* Sometimes, you could direct you to an event or a person.

* It is not necessary for all tickets to be snapped up on the day their location is revealed. If they’re not claimed on the same day, they’ll be left at the location for someone to find them eventually. Hope you’re the lucky one!

For the full details and terms and condition head on over to the official Urbanscapes 2012 page.