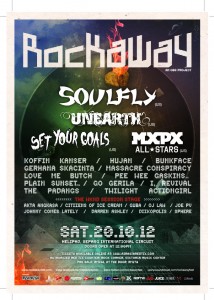 Kuala Lumpur, Malaysia – 25 September 2012: With exactly ONE MONTH to go to the long awaited Rockaway Festival on the 20th of October, Livescape Asia announces its full method of mayhem at its official press conference held at Hard Rock Café, Kuala Lumpur. Speaking on behalf of Livescape, Director of LIVE events, Rahul Kukreja revealed all event information including the additional line-up of performing acts, the set times and much more.

With an already extensive line-up announced back in July, Livescape announces another wave of acts which includes a total of an international band, two regional acts and three more local bands. The main highlights of the newly announced acts are the return of ‘ska specialists, Gerhana Ska Cinta and the highly prolific underground scene legends, Koffin Kanser.

“We’re more than excited with the additions of these two amazing bands of our times. Gerhana Ska Cinta are celebrating their 10th anniversary at Rockaway Festival and we couldn’t deny that Koffin Kanser is the perfect band to open up for Soulfly. So now we’ve got two heavy metal legends rocking up the Rockaway stage. This is what we’d like to call a festival,” says Rahul Kukreja.
In addition to that line-up, American pop punk punters, Set Your Goals will be joining the mainstage alongside Macbeth chosen bands, which includes, the fun loving Indonesians, Pee Wee Gaskins and the highly energetic, Plainsunset from Singapore. If that’s not enough, Malaysia’s scene heavyweights, Hujan will be joining in all the fun too.

“This year’s festival sees us teaming up with Macbeth in a bigger scale. We have Pee Wee Gaskins and Plainsunset joining us at the festival and these guys are brought in by Macbeth and they are also hosting their own ‘road shows’ in Singapore and Indonesia,” added Rahul.

This year’s festival that is set to take place at the Helipad located in Sepang International Circuit on 20 October 2012 is in conjunction with the inaugural, Moto GP. Moto GP ticket buyers are entitled to 20% discount off Rockaway Festival tickets.

Addressing the issues of transportation to the venue, Livescape Asia also revealed that there will be FREE shuttle busses for Rockaway Festival ticket holders that will take them from KL Sentral to Sepang International Circuit and vice versa. These shuttle busses will begin their route at 11am on festival day. Updates on the full timetable will be posted up on the festival’s website soon.
In anticipation of Rockaway Festival 2012, there will be road shows and parties going on for the next three weeks. Details and information on these events are as listed below:


Oct 3rd – AMPED LIVE with Thirteen from Jakarta, I-Revival & The Padangs and DJ set by Rahul OBS, Lust KL, 10pm – 3am, RM35 inclusive of one drink

*Pre-sale tickets are available via airasiaredtix.com and its ticketing outlets and also at additional ticket outlets including Mukha Café, Mollydookers Coffee Bar, Dolls Store and all Guitar store outlets in the Klang Valley.