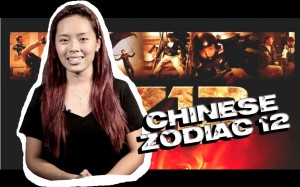 CZ12, which means in Chinese: ????, also known as Chinese Zodiac, is a 2012 Chinese-Hong Kong action film co-produced, written, directed by, and starring Jackie Chan. The film is a pseudo-reboot of a film franchise that began with Armour of God (1987) and its sequel, Armour of God II: Operation Condor.With this film, Chan earned two Guinness World Records: “Most Stunts Performed by a Living Actor” and “Most Credits in One Movie”. Jackie Chan confirms that this would be his last action movie.

This movie is about a man telling the story of the Old Summer Palace and how it was looted in the 1800s by the British in the Second opium war. Among the treasures are bronze heads of the 12 Chinese Zodiac animals. The story is sprung on a quest to track down six bronze sculptures, originally part of a set of twelve representing the animals of the Chinese Zodiac. The sculptures were looted from the Summer Palace in Beijing when the city was sacked by European armies in the 19th century, and there’s an international campaign in progress to demand the return of stolen cultural treasures to their countries of origin. But Jackie plays a soldier of fortune, not a high-minded patriot. He’s in it for the money. But as events take unexpected turns and strange alliances take shape, motives begin to change.