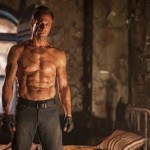 I, Frankenstein is an upcoming 2014 Australian/American action/thriller film written and directed by Stuart Beattie, based on the unpublished graphic novel and original screenplay by Kevin Grevioux. It stars Aaron Eckhart and Bill Nighy.