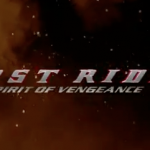 Ghost Rider: Spirit of Vengeance is an upcoming 3D superhero film based on the Marvel Comics antihero Ghost Rider, scheduled to be released in theaters on February 17, 2012. The film is a sequel to the 2007 film Ghost Rider, though Nicolas Cage, who stars in the film, denies that claim. It will be directed by Mark Neveldine and Brian Taylor. Cage will reprise his role as Johnny Blaze/Ghost Rider.