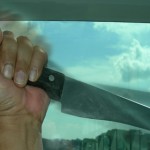 A 30-year-old woman hid in a bathroom for two hours and threatened to commit suicide after she was caught for close proximity with her partner at Dahlia Apartment in Bandar Puteri in Puchong on Saturday.
Armed with a kitchen knife, the sales assistant also turned violent and bit the two police personnel who tried to subdue her.

Corporal Norsalina Baharuddin, 31, and Lance Corporal Dzulani Osman, 32, from Puchong Jaya police station, suffered minor cuts while trying to coax the hysterical woman.
Norsalina said they got the call at 9.50am about the woman, who is a single mother with a 5-year old daughter, and a 40-year old taxi driver, caught earlier at her apartment by the neighbourhood watch (Rukun Tetangga) team.

“The woman threatened to cut her wrist if anyone came near her.