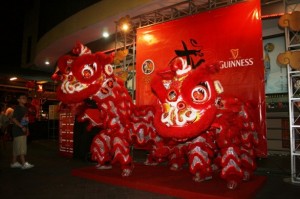 GUINNESS Anchor Bhd (GAB) has several events up their sleeves for this coming Chinese New Year 2012, year of the Dragon.

These include the 99 Golden Dragon Nights at selected coffee chops and food courts nationwide.

To launch the “9 Grand Treasures for the Year of the Dragon” campaign, GAB recently organised their first event at the DG food court in Puchong.

Patrons were treated to magic shows, live performances, lucky draw and games. The patrons also had the chance to take pictures with a replica of the one-kilogramme golden dragon.

GAB marketing director Yap Swee Leng said: “We are bringing the Chinese New Year celebrations to the masses, by offering the largest grand prize in the form of a one-kilogramme dragon statue.

“We are also adding more gold and cash prizes that can be won by those who purchase our brand of beers.”

To win the prizes, consumers will have to check the bottle cap liners of the GAB brand of beers to see if they have won.