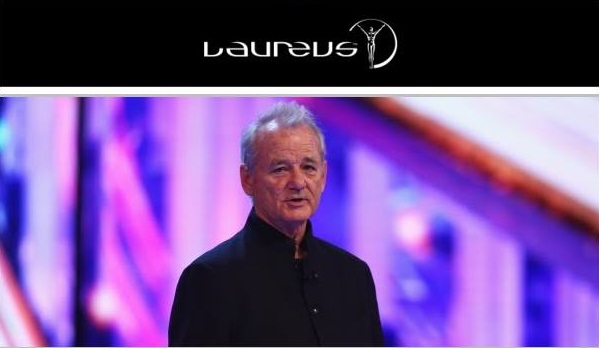 BERLIN, April 17, 2016 – Hugely popular Hollywood comedian, actor and writer Bill Murray, famous for landmark roles in blockbuster films such as Groundhog Day, Ghostbusters, Lost In Translation and The Grand Budapest Hotel, is to host the 2016 Laureus World Sports Awards in Berlin on April 18.

Bill’s latest successes have included the movie Rock the Kasbah and he was also nominated by the Screen Actors Guild for the Outstanding Performance by a Male Actor for `A Very Murray Christmas’ shown on Netflix in December, which he also wrote.

Bill Murray said: “As a world class athlete, I am at my best at a moment like this. It’s what I have trained for.”

The Laureus World Sports Awards is the premier honours event on the international sporting calendar. The winners, as voted by the Laureus World Sports Academy, the ultimate sports jury, made up of more than 50 of the greatest sportsmen and sportswomen of all time, will be unveiled at the Awards Ceremony staged at the Messe Berlin Palais am Funkturm on the evening of Monday, April 18.

The Laureus Academy Members, Ambassadors, Nominees and Guests so far confirmed for Berlin are: