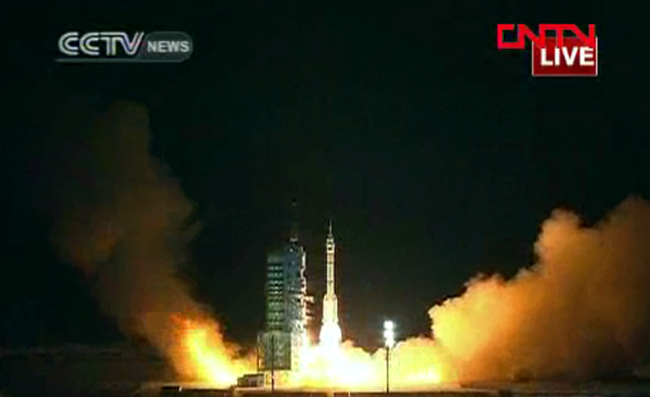 (Reuters): China launched the unmanned Shenzhou 8 spacecraft early on Tuesday, paving the way for a docking exercise with another craft that will be a major test of the rising power’s ability to win a long-term foothold in space.

A Long March rocket blasted off in pre-dawn darkness from the Jiuquan Satellite Launch Centre in northwest China at 0558 a.m. local time (2158 GMT), carrying the Shenzhou 8 craft towards orbit, a live broadcast on Chinese television showed.

The craft will later join up with the Tiangong 1, an unmanned experimental module launched on Sept. 29 that is part of China’s exploratory preparations for a space lab. The name Tiangong refers to a Chinese myth about a “Heavenly Palace”.

Rendezvous and docking exercises between the two vessels are an important part of China’s effort to develop the technological and logistical skills needed to run a full space lab that can house astronauts for long stretches.

If this mission is a success, the next step will entail two similar exercises in 2012 with at least one of the missions carrying astronauts, a spokeswoman for China’s space programme said on Monday.

China launched its second moon orbiter last year after it became only the third country to send its astronauts walking in space outside their orbiting craft in 2008.

Beijing also plans an unmanned moon landing and deployment of a moon rover in 2012. Scientists have talked about the possibility of sending a man to the moon after 2020.