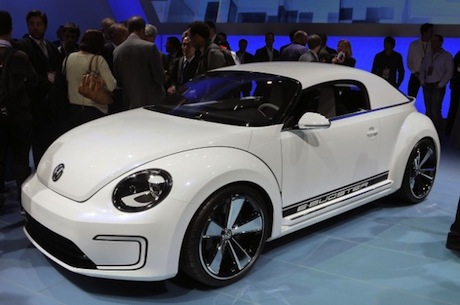 The name for the E-Bugster literally means an electric Bug (Bug is the traditional nickname that the Americans use for the Beetle). The E-Bugster gets flared fenders, 20-inch wheels, lots of chrome and a uniquely shaped daytime running LED lamps. The interiors get an energy consumption display in place of the tachometer. Also part of the standard fare is a display showing intensity of battery regeneration, driving range indicator and battery charge state. The E-Bugster has an 115.58PS electric motor which generates 269.8NM of torque.
The claimed driving range with the Li-ion battery is 160km. VW says that this electric drive unit labelled as Blue-e-motion, will eventually make its way into future products from VW stables.

Meanwhile, the Volkswagen Jetta Hybrid gets a 1.4-litre turbocharged petrol engine mated to an electric motor and a 7-speed dual clutch transmission. VW claims that the new Jetta Hybrid will do 0-100kmph in less than 9 seconds and at the same time average 19.13km on a combined figure. In pure electric mode, it will achieve a claimed top speed of 70kmph.