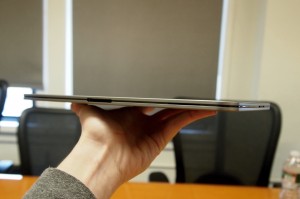 Toshiba unveiled the Excite X10 Android tablet at CES and the first thing that is bound to get your attention is the super thin design, only 0.3 inches thick and weighing 1.2 lbs.

Under the hood you’ll find a TI OMAP 4420 1.2GHz dual-core processor along with 1GB of RAM. As far as the OS goes, however, Toshiba was a bit iffy. The tablet will either ship in mid Q1 with Android 3.2 Honeycomb, or a bit later with Android 4.0 Ice Cream Sandwich. I don’t know about you, but I’d rather wait a bit longer for Ice Cream Sandwich.

The 10-inch screen boasts a resolution of 1280×800, and is built with a special direct bonding technology that allows for such a thin profile. A 2-megapixel front-facing shooter is present and accounted for if you’re into video chat, and a 5-megapixel shooter can be found on the backside of the tab.

In contrast to the Apple iPad, this machine has a lot of ports, including Micro HDMI, Micro USB, and Micro SD so that it is easy to transfer files onto and off of.