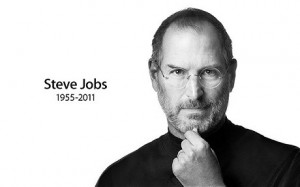 Steve Jobs, the Apple co-founder and former CEO, has died at the age of 56 after a long and highly public battle with cancer.

His family, in a statement released by Apple, said Mr. Jobs “died peacefully today surrounded by his family…We know many of you will mourn with us, and we ask that you respect our privacy during our time of grief.”
The company didn’t specify the cause of his death. Mr. Jobs had battled pancreatic cancer and several years ago received a liver transplant. In August, Mr. Jobs stepped down as CEO, handing the reins to Tim Cook.
“Apple has lost a visionary and creative genius, and the world has lost an amazing human being,” Mr. Cook said in a letter to employees. “We will honor his memory by dedicating ourselves to continuing the work he loved so much.”