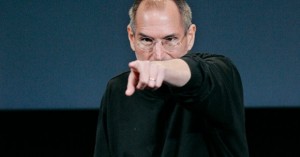 huffingtonpost.com got a hold of Walter Isaacson’s authorized biography of Steve Jobs and reports that according to Isaacson, Jobs was very angry at Google whom he labelled guilty of a “grand theft” when it launched its Android operating system, which competes directly with the iPhone and has surpassed it in popularity.

“I’m willing to go thermonuclear war on this,” he told Isaacson of the patent lawsuit Apple filed against cell phone manufacturer HTC.

In Isaacson’s “Steve Jobs,” a copy of which was obtained by The Huffington Post, the author recalls that Jobs, who was known for his fierce temper, “became angrier than I had ever seen him” during a conversation about Apple’s patent lawsuit, which by extension also accused Android of patent infringement.

“Our lawsuit is saying, ‘Google you fucking ripped off the iPhone, wholesale ripped us off,'” Jobs said, according to Isaacson. “I will spend my last dying breath if I need to, and I will spend every penny of Apple’s $40 billion in the bank, to right this wrong. I’m going to destroy Android, because it’s a stolen product.”

Jobs also slammed Google’s work, telling Isaacson that “outside of Search, Google’s products–Android, Google Docs–are shit.” Though Jobs received criticism for his tight control over the iPhone ecosystem, which contrasts sharply with Android’s “open” approach, he told Isaacson that Apple’s approach stemmed from the company’s desire to “make great products, not crap like Android.”