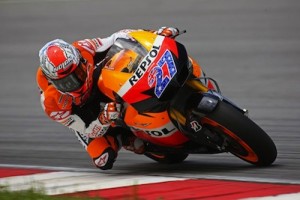 New MotoGP champion Casey Stoner, who clinched the title on with victory at home circuit Phillip Island on Sunday, will be searching to equal his own 2007 record of 10 victories in one season.

Stoner is on a high after his title success, having won nine times this year and reached the podium at every race bar one.

But he said he was disappointed second-placed Lorenzo would not be there to face him in Sepang.

“After clinching the title in the last race at Phillip Island, we go to Malaysia with a lot less pressure and we can just look forward to the race. It’s disappointing to hear that Jorge (will not) be there. We had hoped that his recovery from the operation would mean he could race there but we’ll miss him there again,” he said.

The track – located outside Kuala Lumpur – is known both for being one of the widest on the calendar and for its extreme heat and humidity, but Stoner had no concerns with his preparations.

“After pre-season testing in Sepang we proved to be competitive, so we will arrive there positive and look to enjoy the weekend. We’re also testing the 1000cc bike on Monday after the race. With the Championship now wrapped up, we can concentrate on the development of next year’s machine, so I’m also looking forward to that,” he said.