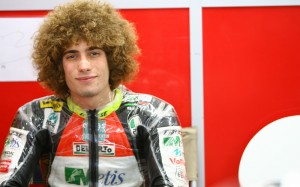 Italian rider Marco Simoncelli has died after a horrific crash at the Malaysian MotoGP in Sepang.

American rider Edwards also fell but escaped serious injury – while fellow Italian Rossi was able to return to the pits.

Simoncelli lay motionless on the track after the impact, while the race was immediately red-flagged.

At first officials were looking to restart the race before the extent of Simoncelli’s injuries became clear.

MARCO SIMONCELLI FACTFILE
1987: Born in Cattolica, Italy on January 20.
1996: Runner-up in the Italian Minimoto Championship.
1999: Champion of the Italian Minimoto Championship.
2000: Claims a back-to-back title in the Italian Minimoto Championship and is runner-up in the European Minimoto Championship.
2001: Moves up to the the Italian 125cc Championship and wins the title in his rookie year.
2002: Wins the European 125cc title.
2003: Takes part in his first full season in the 125cc World Championship with the Matteoni Racing team.
2004: Joins the Rauch Bravo team and wins his first Grand Prix at a rain-soaked Jerez.
2005: Completes another 125cc campaign with the Nocable.it Race team and finishes fifth in the final standings.
2006: Moves up to the 250cc class riding for Gilera. Finishes the season in 10th overall with a sixth place finish at the Chinese Grand Prix his best result.
2008: June – Wins his first 250cc race at the Italian GP in Mugello in controversial circumstances when Hector Barbera crashed into him after Simoncelli appeared to try to block him off.
October – Wins the 250cc World Championship after a successful season with Gilera with a third place finish in the Malaysian Grand Prix at Sepang.
2009: Finishes third overall in the 250cc World Championship behind Japan’s Hiroshi Aoyama and Spain’s Barbera.
2010: Moves up to ride in his debut MotoGP season for Honda. Finishes 16 of the 18 races en route to eighth place in the championship.
2011: May – Collides with Dani Pedrosa while battling for second in the French GP. The resulting crash saw Pedrosa break his collarbone and Simoncelli receive a ride-through penalty, eventually finishing fifth. Simoncelli accepted he needed to re-evaluate his driving style and at times be more cautious.

June – Claims his first MotoGP pole at the Catalan GP but a poor start resulted in a sixth placed finish.

October 23 – Killed in a crash during the Malaysian GP in Sepang.