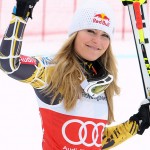 Lindsey Vonn crashed during the super-G Tuesday and was taken to a hospital by helicopter after apparently hurting her right knee at the world championships.

The four-time overall World Cup champion lost balance on her right leg while landing after a jump. Her ski came off immediately, and Vonn slid off course and hit a gate before coming to a halt.

She received treatment on the slope for 12 minutes before going to the hospital. Her U.S. team had no immediate information on her condition.

The crash came almost exactly one year before the start of the 2014 Winter Olympics in Sochi, Russia.