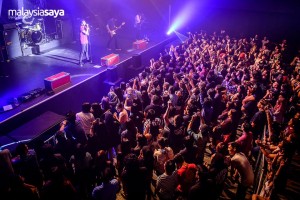 For one night only, You Me At Six rocked out hard in this exclusive Rockaway showcase as they performed live for the first time ever in Malaysia to 600 fans at KL LIVE on September 2 as part of their Asia Tour.

Rockaway, the largest rock festival in Malaysia, bade farewell to fans last year in October in what was one of the biggest rock show ever in Malaysia with over 3,000 hardcore rock fans, some of whom flew in from countries such as Singapore, Thailand and Indonesia to watch the rock festival for one last time.
In this intimate Rockaway showcase, You Me At Six performed to an enthusiastic crowd who were clearly excited to catch their favourite act performing live in Malaysia. The band rocked out hard with their fans throughout the hour and a half show performing their hits which had fans singing and dancing through every song in their set.

Opening the show was Malaysian metalcore band, Tres Empre. The band went on stage at 7.30PM and rocked out with their fans to seven of their most popular songs. The crowd went wild as they cheered on homegrown band who had the honour of being the opening act for their favourite British rock band. Fans were pumped up and excited by the time they were done with their set and were more than excited for You Me At Six to finally come on stage.
The band did not disappoint their fans as they took the stage at 8.30PM and performed their hits such as Too Young, Underdog, Stay With Me, Little Death, Forgive and Forget, Cold Night, Bite My Tongue and Lived A Lie. The band were very charismatic and played a great set, owning the stage and keeping their fans full of energy throughout the night.

After the show, the band had a meet and greet session with a few lucky fans who were elated to finally meet their favourite five piece alternative, pop rock band from Weybridge, Surrey.