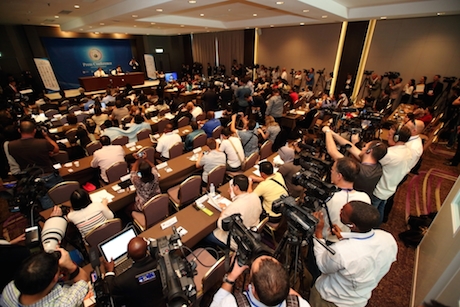 SEOUL—Governmental and religious leaders, youth organizations, and women groups gather to attend the world’s largest peace summit held in the Republic of South Korea, where a sustainable solution to peace will be presented, as well as methods and programs for the cessation of war.

On September 17-18, the 2014 World Alliance of Religions’ Peace (WARP) Summit will be held in Seoul, the Republic of Korea. The locations where the summit will be held are the Gate of Peace, Jamsil Sports Complex Stadium and 63 Building Convention Center. Approximately 200,000 people are scheduled to attend. Among them are 1,500 leaders including international heads of states and leading representatives of world religions such as Catholicism, Protestantism, Eastern Orthodox Church, Islam, Buddhism, and Hinduism, as well as organizations working in collaboration with the International Peace Youth Group (IPYG) and the International Women’s Peace Group (IWPG). Over 100 national broadcasting companies from around the world will also cover the events of the WARP summit.

A question was posed to Mr. Lee in a press conference held before the first day: “The Middle East is a region rife with religious wars and conflicts. Is it possible to achieve peace here as in Mindanao, Philippines?” Mr. Lee responded, “Just because peace is achieved in the Middle East does not mean world peace is achieved. Rather than considering an issue that is confined to only one region, we need to resolve the fundamental problem that has its roots worldwide. Therefore, heads of state around the world must come to an agreement to establish an international law that bans war so that all wars come to an end permanently.” Mr. Lee is a global peace advocate and the Chairman of Heavenly Culture, World Peace, Restoration of Light (HWPL) as well as IPYG and IWPG.

Also, Ms. Nam Hee Kim said, “Until now, women have been perceived as weak. But through Mr. Lee, I gained confidence that women can also play a central role in achieving world peace. This is because the power to protect the children who are forced out to battlefields is in the mothers. If all women in the world unite as one, I am certain that world peace will definitely be achieved.“

Ms. Kim is a global female leader and representative of IWPG.

Following the press conference on September 16 at the Cosmos Hall of Walker Hill Hotel, an HWPL affiliated organization called IPYG hosted a conference for more than 500 leaders of youth groups from 127 nations including nations that are experiencing conflicts such as the Balkan Peninsula, Ukraine, Yemen, Syria, and Israel. They discussed programs that can help build mutual understanding and trust.

Afterwards, a preliminary meeting of the WARP Advisory Council was held, where former and current presidents, prime ministers, premiers, chairmen of the national assemblies, and chief justices of the supreme courts from various nations gathered to share their experience in leadership and future peace initiatives.

Former and current heads of state, important figures from all walks of life and religious leaders with authority will attend this summit where they will devise a specific plan to put an end to wars around the world. They will also present a real solution to religious conflicts. The number of people attending the summit as well as the scale of this event is expected to be unprecedented