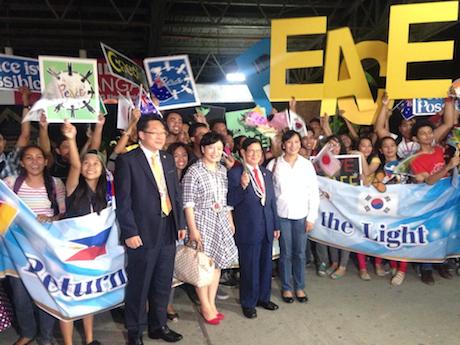 With the hope to achieve world peace, a Peace Walk was held at the city of Zamboanga, Mindanao, Philippines by Heavenly Culture World Peace Restoration of Light (HWPL) on the 11th of August. The Zamboanga Peace Walk had estimated participants of 12,000 including governors and religious leaders from the Philippines. The day after the Peace Walk, Mr. Lee gave a lecture to about 3,000 students and on the 13th, a Peace Forum was held with 300 police officer participants from the Philippine National Police at St. Joseph Church in Zamboanga.

The representative of HWPL, Mr. Lee, has hosted peace walks world-wide from dozens of countries with hundreds of thousands of participants including youths and citizens. As an internationally well-known peace advocate, Mr. Lee has declared ‘The Declaration of World Peace’ and this has successfully brought a Peace Agreement between the Catholics and the Moro Islamic Liberation Front (MILF) this past January. The Peace Walk in Zamboanga became an extension of the peace walk held this past January. It was conducted not only to bring an end to religious conflict in the region but also to inform people about the start of World Peace. Zamboanga, where the peace walk was held, is the region that suffers the most conflicts due to religious differences amongst the Mindanao people. Last September, Zamboanga suffered heavy causalities of 138 people including 12 civilians because of the conflict between Mindanao National Liberation Front (MNLF), an Islamic organization in Mindanao, and the government.

A light of hope seems to shine at the war-torn Zamboanga district through the Peace Walk. What brings it special attention is that an International Peace Agreement was signed at the Peace Agreement Ceremony by the governor of the states of where religious conflicts often break out such as Zamboanga, Basilan, Sulu and etc. Catholic, Muslim and Buddhist religious leaders and representatives were in attendance as well. After the agreement ceremony and peace walk, there was declared ‘The Declaration of World Peace’ again, which was written by Mr. Man Hee Lee. The participants applauded with agreement of the possibility of world peace. Accordingly, the people awarded Mr. Lee with an appreciation plaque to express their gratitude for his commitment to the peace achievement. Mr. Lee gave a lecture at Zamboanga State College of Marine Science and Technology and the Philippine National Police (PNP) and the police officers thanked Mr. Lee for bringing a peaceful era and stating the solution for world peace. They showed their appreciation by awarding Mr. Lee with a plaque. Additionally, they awarded another appreciation plaque to Mrs. Kim, the representative of the International Women’s Peace Group (IWPG), who gave a speech alongside Mr. Lee.

During the lecture at the PNP, Mr. Man Hee Lee said, “Let us all work together as missionaries and leave a legacy of a peaceful world to future generations.” His peace movement delivered great hope not only in Zamboanga but to all Filipinos who desire peace. There were plenty of broadcasting companies present to broadcast this peace event in the Philippines.

Currently on his 13th journey around the world, Mr. Lee of HWPL and his peace delegation have a substantive solution for world peace. They are expected to bear much fruit at the World Alliance of Religions Peace Summit held in South Korea in September.

Somebody That I Used to Know – Walk off the Earth