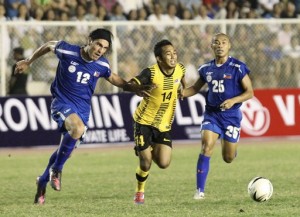 Philippines’ Angel Guirado (L) and Lexton Moy (R) battles for the ball against Abdul Manaf Mamat of Malaysia during a friendly soccer match at the Rizal stadium in Manila February 29, 2012. The game is part of the Philippines’ preparation for the Asian Football Confederation Challenge Cup next month in Nepal. The match tied at 1-1.

Ranked 150th in the world, the Malaysian Tigers are all set to defend their Suzuki Cup title this year. Despite losing heavily to Japan in an Olympic qualifiers last week, Malaysia hopes to salvage its pride with a victory in the friendly match against the Philippines. With the Super League, FA Cup and Malaysia Cup to keep its players in top form all year-round, Malaysia enjoys a big advantage over the Philippines team.

The Philippines, on the other hand, have not had much success lately. The Philippine Azkals U-23 played poorly in last year’s SEA Games, placing dead last in their group. Ranked 156th in the world, the Azkals have taken on strong teams like Uzbekistan, Australia and LA Galaxy to improve their game following the poor performance at the SEA Games.

Will the Westports Malaysia Dragons Contend for Next Year’s ABL Title?