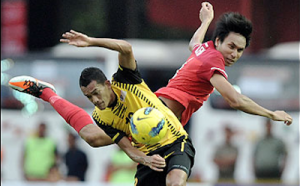 Defending champions Malaysia were held to a 0-0 draw by Singapore in the opening game Group A match of the 2011 SEA Games.
Both teams came out cagey, seemingly content to lull their opponents into making the first move and breaking out of their shell but neither goalkeeper had much to do for the opening minutes until Singapore winger Fazli Ayob almost gave the Young Lions the lead in the 14th minute but his effort was directed straight into the grateful arms of Malaysian custodian, Khairul Fadmi Che Mat.

Lions skipper Hariss Harun was the next player to attempt a shot at goal three minutes later but his shot was way off the mark before the Harimau Muda skipper, Bathtiar Baddrol replied with a thunderous free-kick that forced Izwan Mahbud into a wonderful save to keep the scoreboard as it is.

The best chance of the first-half came when Fazli’s mesmerising dribble beat three defenders before unleashing a grounder which was well-saved by Khairul.