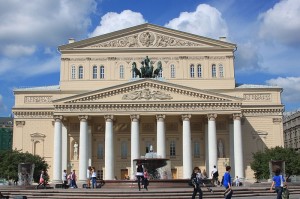 The first production to be seen on the historic stage of Moscow’s Bolshoi Theatre’s this week, after its six-year renovation, is a modern take on Mikhail Glinka’s folkloric romantic opera “Ruslan and Lyudmila”.

Singers and musicians took part in the dress rehearsal on Monday night ahead of the opening on Thursday.

Called a “national brand” by President Dmitry Medvedev at its lavish reopening on Oct. 28, the Bolshoi promised Russian opera and ballet premieres.

Glinka’s opera is based on the 1820 poem by Alexander Pushkin.

The Bolshoi’s curtains, with the word ‘Russia’ scrawled across them and coloured crimson and gold, matching the new decor of the theatre, parted to reveal an elaborate pastel blue set reminiscent of traditional Russian Easter eggs.

The singers of the Bolshoi opera company wore the traditional costumes of a Russian fairy story, with men in elaborate ‘kokoshniki’, jewel-studded headresses, and men in richly-coloured robes.

Singer Mikhail Petrenko performs the part of the hero Ruslan, who undergoes extreme suffering in his journey tofind his love Ludmila, after she is snatched from their wedding ceremony by the sorcerer Chernomor.

“All these problems, emotions, anxieties are multiplied by ten and so it turns a fairy tale into a soul-searching drama,” Petrenko told journalists gathered backstage in the restored Bolshoi.