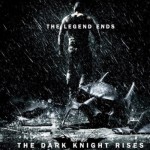 Synopsis: Due to the incident of Two Face, Gotham only hero Batman is doomed to fall ,however to protect the city that mark him as enemy ,the hero rises again to fight the threat of Bane.

To mark that series, Batman movie  had taken darker path under Director Christopher Nolan, which did give a comeback  to batman legend itself, dark storyline that bring much thrill and reality to character of dark hero the viewer, so will the movie be the ending point of hero story or a checkpoint to a new legend.