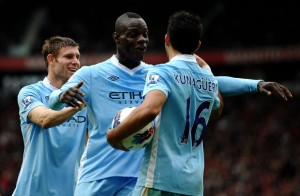 Mario Balotelli starred a day after escaping a fire at his home in suburban Manchester, putting City ahead in the 22nd minute, then doubling the lead in the 60th, 13 minutes after Jonny Evans was ejected for bringing down the Italian forward.