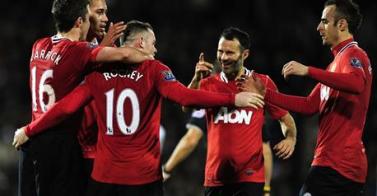 Manchester United earned its biggest win in three months on Wednesday, routing Fulham 5-0 to keep the heat on leader Manchester City in the Premier League title race, but saw two key players pick up injuries.
Dimitar Berbatov rounded off the victory with an audacious backheel in stoppage time after goals from Danny Welbeck, Nani, Ryan Giggs and Wayne Rooney.

“We played some superb football in the first half,” United manager Alex Ferguson said. “It’s not an easy place to come. We have experienced that in the last three years. We have got one point from nine here so that shows you the difficulties.”

The victory came at a cost, with defender Phil Jones forced off injured in the 20th minute after being caught by Clint Dempsey’s arm while dueling for the ball.

And his replacement, Ashley Young, came off injured while tackling Dickson Etuhu at the start of the second half with an unspecified injury that Ferguson said will rule him out for two to three weeks.
“The tackle on Ashley Young was a very aggressive tackle and I will have to see that again,” Ferguson said. “Fulham were very aggressive in the second half and Ashley Young has paid the price for that. He has got a sore one so will be out for two to three weeks.

“On Phil Jones it was an elbow from Dempsey, but I don’t think it was intentional. But he caught him with an elbow. We are sending him for an X-ray tomorrow and it doesn’t look great. We are picking up injuries at the moment.”

United, though, is only two points behind neighbor City, which beat Stoke 3-0 at Eastlands.