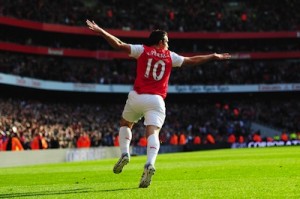 Robin van Persie climbed off the bench to rescue Arsenal with two goals to sink Stoke 3-1 at the Emirates Stadium.

Arsene Wenger’s decision to start his captain on the bench almost backfired as they only had Gervinho’s strike to show for their dominance in the first half.

To add to their problems, former Tottenham striker Peter Crouch marked his return to north London with an equaliser 10 minutes before the interval.

With the Gunners labouring against their battle-hardened visitors, Van Persie was let loose with 25 minutes remaining.

And within a quarter of an hour he had scored twice to bail out his shot-shy team-mates and take his goal tally to a remarkable 29 in his last 34 appearances for the club.