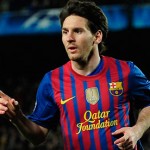 Four days after scoring five times in a Champions League record Lionel Messi has added two more goals to reach 50 for the second straight season and lead Barcelona to a 2-0 win at Racing Santander in La Liga.

Messi scored five in Barcelona’s 7-1 win against Bayer Leverkusen on Wednesday and his double on Sunday further enabled him to close to within five goals of matching César Rodríguez’s all-time club record of 235.

“Messi stands out from every other player in the world,” the Barcelona midfielder Cesc Fábregas said. “It is a pleasure to play with him and to have him on the same team because he gives you that extra dose of confidence that every champion needs.”

Barcelona’s fourth straight victory means they are back to 10 points behind the runaway leaders, Real Madrid, who beat Real Betis 3-2 on Saturday, but with only 12 rounds to play the defending champions’ chances of catching their rivals are dwindling.