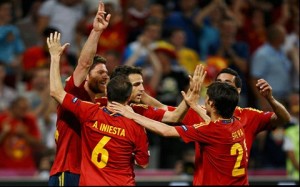 Football lovers can now have good night rests as the curtains came down on yet another fantastic Euro finals with Spain creating history as the first ever team to win the Euros back-to-back and also the first team to win three major tournaments in a row with their 4-0 demolition of Italy.

David Silva opened the scoring after a quarter of an hour with a header, before a lung-bursting run and finish from Jordi Alba put Spain two goals ahead by half-time.

The second half saw chances for both teams, but the match changed on the hour mark after Thiago Motta was stretchered off moments after coming off the bench, reducing Italy to ten men with all three substitutions already used.

There was no way back for the Azzurri after that, as Spain put on a passing exhibition to drain the life out of Cesare Prandelli’s men, before Fernando Torres and Juan Mata added clinchers in the 84th and 88th minutes to recapture the European Championship for La Roja for the third time.

Despite pre-match comments hinting that he would play with a recognized striker, Vicente Del Bosque opted for Cesc Fabregas to lead the line ahead of Alvaro Negredo and Torres in a ‘false nine’ role.

Torres on the Brink of Chelsea Exit