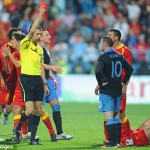 Wayne Rooney was sent off in shame and criticised by Fabio Capello as England surrendered a two-goal lead to Montenegro – but still squeezed into the Euro 2012 finals.
Capello was so angry that TV cameras appeared to pick him up uttering an Italian expletive in the direction of the player as he passed him.

A late first-half strike from Elsad Zverotic and Andrija Delibasic’s injury-time header cancelled out goals from Ashley Young and Darren Bent, as Montenegro obtained the point needed to ensure a Euro 2012 play-off place.

Terry told Sky Sports after the game: “We’re a little bit disappointed obviously, after being 2-0 up we’re disappointed in the way we ended up drawing the game.

“It’s a great thing to get where we’ve got we’re top of the group and we’ve worked hard all the way through.

“The first half we were very disappointed to concede so late on. They were standing off us and letting us have the ball and we felt really in control.

“The manager said at half time it was maybe too easy for us and we let them in the game and unfortunately they got the goal at the end but we’re happy we’re through.”