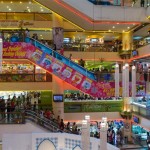 The country’s fascination with shopping malls have turned these properties into highly sought-after assets.

So far this year, the number of deals involving malls or retail assets has reached a record and there is a possibility that more could be announced this year, industry experts say.

At least nine deals valued at over RM2 billion have been reported in the first nine months of the year, stretching from the northern state of Penang to Johor in the south and from the west of Klang Valley to the eastern state of Pahang.

Improved consumer spending and liberalisation of the market has helped spur interest in retail assets.

As the global economic recovery continues to be shaky, Malaysia has turned to domestic demand to boost its economy, chief economist at Bank Islam Azrul Azwar Ahmad Tajudin said.

“Malaysian consumers have proven to be rather resilient even during times of crisis. During the 2009 recession, the economy contracted by 1.7 per cent but private consumption was still in positive territory,” he added.

In year 2000, private consumption or consumer spending accounted for 43.8 per cent of the gross domestic product (GDP) while in 2010 the number surged to 53.3 per cent of GDP.