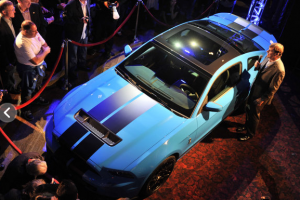 The company will unveil the GT500 and a freshened version of the regular Mustang on Tuesday night at the Los Angeles Auto Show. Ford says the Shelby version will have the most powerful production V-8 engine in the world, with a top speed of over 200 mph.

The 5.8-liter engine is mated with a six-speed automatic transmission. Ford wouldn’t release the gas mileage but said it would be good enough to avoid the U.S. tax on gas guzzlers.