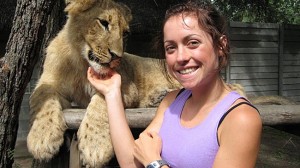 AN Australian woman who died after being gored by an elephant in Malaysia was a gifted veterinarian with a keen interest in wild animals, her mother says.

Sydney-based vet Jenna O’Grady Donley was attacked by a pygmy elephant in a remote wildlife park on the Malaysian part of the island of Borneo yesterday.

The 25-year-old was trekking with a friend and a local guide in the Tabin Wildlife Reserve in Sabah state when the elephant turned on them.

Her mother Liz Donley said the sanctuary said it was a very unusual occurrence.

She said Jenna and her friend were very respectful of animals’ environments but believed the group had startled the bull elephant.

“This was an animal by itself and they startled it.