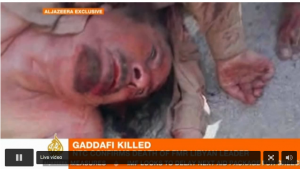 A senior NTC official has said that Muammar Gaddafi has died of his wounds after being captured near Sirte.

Another NTC commander said that Moussa Ibrahim, former spokesman for Muammar Gaddafi’s fallen government, was also captured near the Sirte.

“I’ve seen him with my own eyes,” he said and showed Reuters a picture of Jabr’s body.

“Moussa Ibrahim was also captured and both of them were transferred to (our) operations room.”

Earlier, Jamal abu-Shaalah, a field commander of NTC, told Al Jazeera that the toppled leader had been seized, but it was not clear whether he was dead or alive.