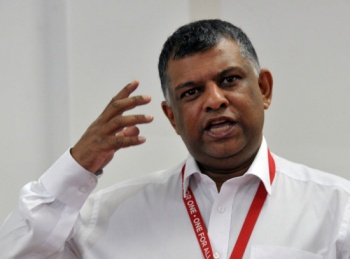 Budget carrier AirAsia is setting up a strategic planning centre in Indonesia, away from its Malaysian headquarters, with head Tony Fernandes expected to expand regional operations from there.
Fernandes, chief executive officer of AirAsia and currently head of its Malaysia operations, is expected to move to the centre in Jakarta, a spokesman confirmed Wednesday.

“Shifting AirAsia’s emphasis to a regional strategy is, we believe, not just good business, but also a move that will keep us ahead of the inevitable competition that is heading our way,” Fernandes said in a statement.

The carrier will name Fernandes’ replacement for its Malaysia operations next Monday. The group headquarters will remain in Malaysia, officials confirmed.
Asia’s largest budget airline has boomed from a decade ago, when it only had two aircraft.

His remarks end weeks of speculation that the airline’s headquarters would move from Sepang in the wake of a failed share swap deal between AirAsia and national airline, Malaysian Airline System Bhd.

The deal, aimed at helping both carriers compete against rivals, fell through due to opposition from MAS’s labour union.

Fernandes said locating the regional office away from the airline’s Malaysian operations will allow senior managers to work in a neutral environment free of the day-to-day pressures in the airline’s headquarters.

The Jakarta office will allow the airline to tap the large Indonesian market and raise AirAsia Indonesia’s profile before its listing on the Jakarta Stock Exchange by the end of the year.

It will also help the airline lobby the secretariat of the Association of South East Asian Nations, also based in the city, for greater integration in the region, he said.